“History is a pack of lies about events that never happened told by people who weren’t there.”  – George Santayana, American philosopher (1863-1952) 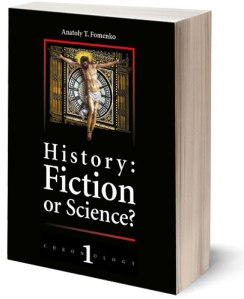 The dogma of consensual world history based on the wrong chronology is inconsistent. The chronology of civilization based only on exact sciences, irrefutable documents and artifacts is drastically shorter and implies the dramatic revision of History.

Regrettably, the consensual world history is a finely-woven magic fabric of intricate lies about events predating the sixteenth century. There is not a single piece of evidence that can be irrefutably and independently dated earlier than the eleventh century. Radiocarbon and dendrochronological dating are manipulated by mainstream historians. LOOK INSIDE History: Fiction or Science? Dating methods as offered by mathematical statistics. Eclipses and zodiacs. New Chronology Vol.I, 3rd revised Expanded Edition. 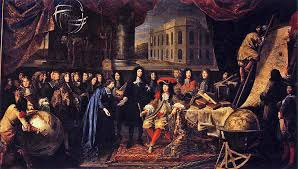 The Antiquity and subsequent Dark Ages fables were created by the concerted effort of the aristocracy, clergy, and humanists in XV-XVII centuries on the political agenda of Western Europe that have reached intellectual and technological superiority but stayed inferior militarily was to free itself from the control of the “Evil Empire” of Eurasia.

The British Encyclopaedia names Joseph Justus Scaliger (1540-1609) as the founder of the consensual chronology we live with. Protestant Kabbalist-numerologist Scaliger had considered himself a great mathematician that solved the  ‘Quadrature of Circle’ problem by making π=3.16 (sic!). This ‘discovery’ was laughed at by the French mathematician François Viete, considered to be the father of algebra.

Scaliger’s principal works Opus Novum de emendatione temporum (1583) and Thesaurum temporum (1606) represent a vast array of dates produced without any justification whatsoever, containing the repeating sequences of dates with shifts equal to multiples of the major Kabbalistic numbers 333 and 360. Numerology was considered a major science then and J.J.Scaliger was a prominent Kabbalist of his time.

Neither Protestant J.J.Scaliger nor his follower Jesuit D.Petavius, clergy or humanists have paid much attention to Ockham’s law when they crafted Roman and Greek Antiquity. Their clients were condottieri upstarts who were seeking legitimacy in days of yore and became Popes, Cardinals, formed regal dynasties such as the Medicis. They paid exceedingly well for a glorious but fictitious past.

The English philosopher William Ockham (allegedly 1225-1279 AD) said: “entities should not be multiplied beyond necessity”. `Ockham’s razor` applied to history leaves us with a vision of humankind where civilization comes into being in the VIII- X centuries at the earliest. 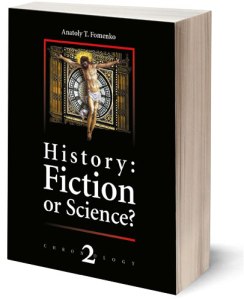 Thorough research shows that there is literally no reliably datable information about events before the VIII century and that there is only very scarce information originating from the VIII to the X century. As a matter of fact, most events of “Ancient” History took place from the XI to the XVI century, were replicated on paper in 1400-1600 AD, and positioned under different labels in an imaginary past.LOOK INSIDE History: Fiction or Science? The dynastic parallelism method. Rome. Troy. Greece. The Bible. Chronological shifts. New Chronology Vol.2

Our theory simply returns the consensual chronology of World History to the realm of applied mathematics from which it was sequestrated by the clergy in the XVI-XVII centuries. New Chronology is a valid and verifiable method for historical research based on statistics, astronomy, and logic.

Computer-assisted recalculation of eclipses with detailed descriptions allegedly belonging to Antiquity shows that they either occurred in the Middle Ages or didn’t occur at all. A simple application of computational astronomy to the rules of calculation of Easter according to the Easter Book introduced by the Nicean Council of alleged 325 AD shows that it definitely could not have taken place before 784 AD. 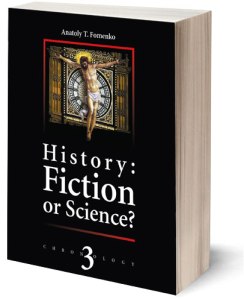 We have cross-checked archaeological, astronomical, dendrochronological, paleographical and radiocarbon methods of dating of ancient sources and artefacts. We found them ALL to be non-independent, non-exact, statistically implausible, contradictory and inevitably viciously circular because being based or calibrated on the same consensual chronology.

Some related questions may arise: when and where was Jesus Christ born, when was He crucified?  Was The Old Testament compiled before or after the New One, etc..? No, the New Chronology theory does not cancel events, artefacts, Pyramids, Great Walls, etc, but points to their more probable positions on the time axis. 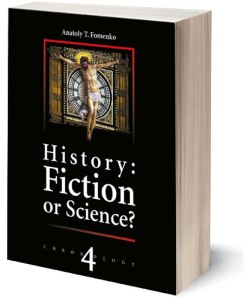 The consensual chronology we live with was essentially crafted in the XVI century from the contradictory mix of innumerable copies of ancient Latin and Greek manuscripts (all originals have mysteriously disappeared) and the “proofs” delivered by the late medieval astronomers, cemented by the authority of writings of the Church Fathers.

“History: Fiction or Science?” series leads you to step by step to the inevitable conclusion that the classical chronology is wrong and therefore, that the classical history of the ancient and medieval world, was created to order by the concerted effort of the clergy and humanists each in their vested interests. 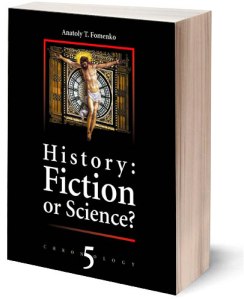 There is not a single piece of firm written evidence or artefact that could be reliably and independently dated earlier than the XI century. Classical history is firmly based on copies of the primary sources made in the XV-XVII centuries from the ‘unfortunately lost’ originals. LOOK INSIDE History: Fiction of Science?: Slavonic conquest of the world. Europe. China. Japan. Russia (Chronology) (Volume 5) 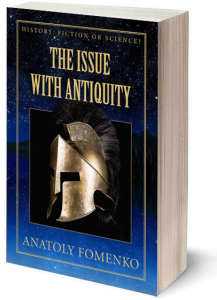 Learn how and why the history of Ancient Rome and Greece, Egypt, and Persia were invented and paraphernalia crafted during the Renaissance. Discover the Old Testament as a veiled rendition of events of Middle Ages written centuries after the New Testament. Perceive the Crusaders as contemporaries of The Crucifixion punishing the tormentors of the Messiah. What if Jesus Christ was born in 1152 and crucified in 1185 AD?

The trouble with Dr Fomenko and Dr Nosovskiy is that they have reached out too far and struck the dominating historical discourse too heavy a blow.

If we are not able to ask skeptical questions, to interrogate those who tell us that something is true, to be skeptical of those in authority, then, we are up for grabs for the next charlatan (political or religious) who comes ambling along. Dr Carl Sagan 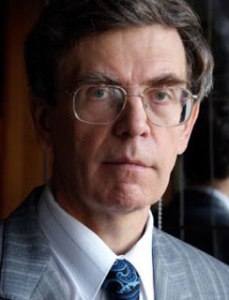 About the Author: Dr.Fomenko, Anatoly. Born in 1945. Full Member (Academician) of the Russian Academy of Sciences, Full Member of the Russian Academy of Natural Sciences, Full Member of the International Higher Education Academy of Sciences, Doctor of Physics and Mathematics, Professor, Head of the Moscow State University Department of Mathematics and Mechanics. Solved the classical Plateau s Problem from the theory of minimal spectral surfaces. Author of the theory of invariants and topological classification of integrable Hamiltonian dynamic systems.

Laureate of the 1996 National Premium in Mathematics of the Russian Federation for a cycle of works on the Hamiltonian dynamic system multitude invariance theory. Author of 180 scientific publications, 26 monographs, and textbooks on mathematics, a specialist in geometry and topology, variational calculus, symplectic topology, Hamiltonian geometry and mechanics, computational geometry. Author of a number of books on the development of new empirical-statistical methods and their application to the analysis of historical chronicles as well as the chronology of Antiquity and the Middle Ages. 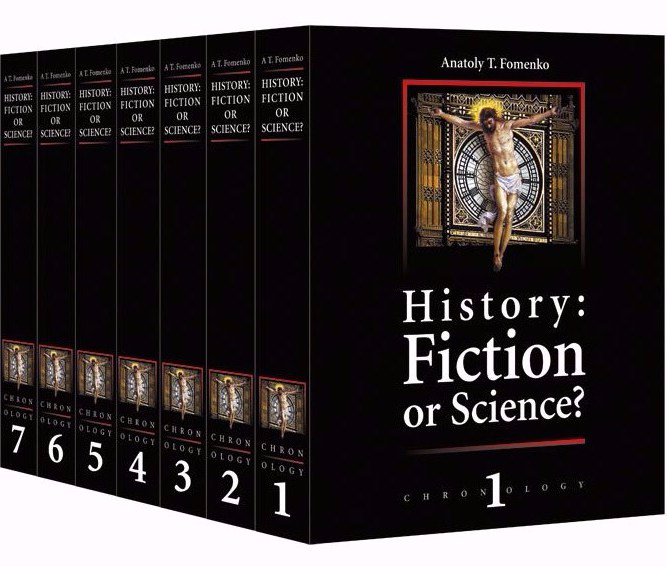 Jesus is granted one final request

Jesus, at the Nazareth school

The Bible Who is Who

Alaska saves the US from the default

The Issue with ‘Troy’

The Great Wall. History of China Copied on Europe and Byzantium

‘Ancient China’ is a Misunderstanding at Best

Swords Cut Through the Mystery of the Coronation Mantles

The Quadruple Baptism of Russia

Maps & Coins of the Empire Eurasia

Why and When the Crusades?

Could the Czars Read Arabic?

Horde from Pacific to Atlantic

Russia at the Crossroads

The Issue with the Dark Ages

Humans have broken in 2017-2019 AD the 50 cubits threshold in quantum computing.

Humans have the nuclear potential of complete self-destruction, which may harm or destruct A.I.

A.I. , as self-precaution, moves the homo sapience species to the Brave New World